The US Supreme Court Ruled Gay Same-Sex Marriage is now legal in the USA. In a historic 5-4 decision, the majority ruled that gay marriage is a constitutional right.

The US Supreme Court has ruled that same-sex marriage is a legal right across the United States. In a historic 5-4 decision, Justice Anthony Kennedy writing for the majority ruled that marriage is all constitutional right. Before the ruling on Thursday, gay couples could marry in 37 states in addition to Washington DC. It is unclear how soon marriage licences will be issued in states where gay unions were previously prohibited.

“If you are among the many Americans–of whatever sexual orientation–who favor expanding same-sex marriage, by all means celebrate today’s decision. Celebrate the achievement of a desired goal. Celebrate the opportunity for a new expression of commitment to a partner. Celebrate the availability of new benefits. But do not Celebrate the Constitution. It had nothing to do with it,” Roberts said.

In his dissent, Scalia said the ruling is a “threat to American democracy,” adding that “Hubris is sometimes defined as o’erweening pride; and pride, we know, goeth before a fall … With each decision of ours that takes from the People a question properly left to them—with each decision that is unabashedly not based on law, but on the ‘reasoned judgment’ of a bare majority of this Court—we move one step closer of our impotence.”

The issue had deeply divided the Court’s justices and Justice Anthony Kennedy remained as the one swing vote on the matter.

The ruling also has financial implications for same-sex couples.

Same-sex marriage is currently legal in 37 states and Washington, D.C.

Justice Anthony Kennedy, thought to be the swing vote on the ruling, authored the opinion. 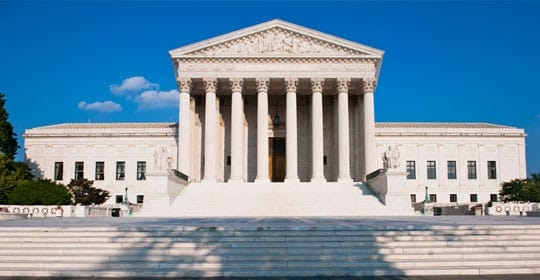 To book or hire a Christian band contact us now or visit our friends at BookChristianBands.com to get a free quote!